A clutch of fresh-caught crappie can make for mighty good eatin’—unless, that is, they’re woefully undersized.

Just how big is big enough when it comes to keeping crappie?

There’s a bit of wiggle room here, but generally speaking, anything between 10 and 12 inches will make a satisfying meal. Conversely, if it’s under nine inches, it’s probably not worth devoting valuable cooler space.

It’s not always as simple as breaking out your tape measure, though. Read on for a more detailed breakdown that will help you determine when to add a crappie to your stash box and when to cut your losses and throw it back.

For the sake of review, here’s a helpful table you can refer to whenever you’re unsure about whether to crappie wriggling at the end of your line:

For starters, you could be violating the law by keeping crappie that’s too small.

Most places have regulations concerning how big a given species of fish must be before being caught legally. In Ohio, for example, the minimum legal length is nine inches, while in Texas, it’s 10. In some locations, including many parts of California, Wisconsin, and Kentucky, there are hard and fast take limits but no size guidelines at all.

As you can see, these sorts of regulations can vary quite a bit by region. Therefore, it will be a worthwhile use of your time to research and familiarize yourself with the laws in your neck of the woods. The last thing you want is to wind up on the wanted list because you brought home a bunch of underwhelming specimens. Talk about injury to insult.

You can dig up the information you’re looking for on the website of your state’s Department of Parks and Recreation or its Division of Wildlife. There, you’ll also find the maximum legal number of crappie you can rack up in a given session, which is an equally useful thing to know.

Even if there aren’t any park rangers waiting in the wings to measure your catch and slap you with a hefty fine if any of them happen to come in under the legal minimum, it’s always best to play by the rules, if for no other reason than to preserve your integrity as a sportsman. Abiding by the size guidelines for your state, county, territory, or town also keeps the playing field level for other fishing enthusiasts.

The specific type of crappie you’re angling for could also prove to be a factor in terms of both staying within the confines of the law and appeasing your hunger.

There are two main species of crappie found in the United States: white crappie and black crappie. There’s not a tremendous amount of difference between the two aside from a handful of visual characteristics, such as general coloration, identifying markings, and several dorsal spines (5-6 on a white crappie and 7-8 on a black one, in case you’re curious).

Even so, discrepancies in the populations or living conditions of these fish could compel authorities in different areas to issue different regulations pertaining to their pursuit and possession. If, say, black crappie are on the decline in a certain lake or stream, the legal take limit might be temporarily restricted to below 20 per day.

Under similar circumstances, wildlife regulators could hypothetically put out different size guidelines for the two species in order to conserve numbers of mature fish and ensure that they have plenty of opportunity to spawn. This isn’t often the case, but it’s always a good idea to check for updates to your local fishing policies periodically. Better safe than sorry.

Now that we’ve gone over the legal aspects of sizing up crappie, we can talk about the good stuff—eating them.

Like most other aquatic creatures of less-than-remarkable mass, the culinary value of individual crappie is most often determined by their length rather than their weight. Since longer fish are also apt to be bigger around, this single measurement will usually be enough to tell you whether to toss a fresh catch overboard or toss it with a little olive oil, garlic, and lemon.

A lot of less experienced anglers seem to be of the mind that a monstrous haul is always preferable to an ordinary one, but that isn’t necessarily the case. There’s a kind of sweet spot you want to hit where crappie is concerned, and it lies closer to the middle of the fish’s two extremes in size than you might expect.

As a rule, any crappie you hook that’s under nine inches in length probably won’t be worth the time or energy it would take to gut it, cut it, and get it on the table. There are occasional exceptions to this rule, which we’ll get into later, but eight times out of 10 I would say don’t bother.

Labor-intensity notwithstanding, it may not be strictly legal to keep crappie that don’t stack up, depending on the laws where you live.

This is the “Goldilocks” range most commonly quoted by fishermen who actually eat their catch. Crappie with these dimensions are a cinch to clean without creating unnecessary waste, and they fry up exceptionally well to boot. Half a dozen or so will likely be enough to feed your whole family or fishing party.

If you’ve got a secret hot spot that consistently offers up 10-12-inchers, consider yourself lucky—and don’t tell anyone else about it.

The bigger the better, right? Yes and no.

On the one hand, you’ll have more grub to go around (and a better story to tell your loved ones when you return from your outing). On the other hand, snagging too many large adults too frequently could have a destabilizing effect on the fish’s local population, which is something all responsible anglers should do their best to avoid.

Note: The same basic principles outlined above also apply to other scrumptious panfish like perch, bluegills, and rock bass, so if you’re ever in doubt about the size of one of those line-jerkers, it never hurts to settle for a happy medium.

As mentioned, there is a special exception to the length-focused criteria given above: namely, how thick the fish is.

Some fishermen are perfectly content to go home with a box full of six-to-eight-inch crappie if they’re sufficiently meaty. The filets these more modest fish yield obviously won’t be as big, but they can be just as filling, sometimes even more so. It also tends to be easier to cook slightly thicker cuts, as they’re less prone to falling apart under high heat.

Every crappie is unique, which means there’s no way to figure out which ones to hang onto other than to look them all over carefully. Try to get  in the habit of eyeballing the various proportions of each and every catch—length, width, and thickness—as soon as you pull it from the water. 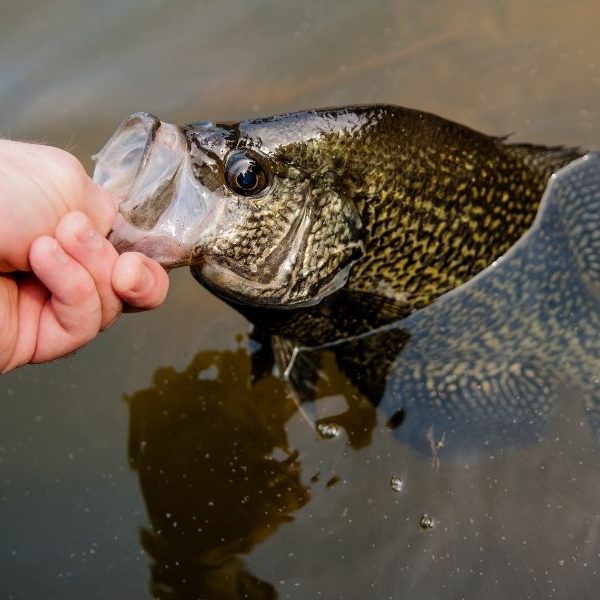